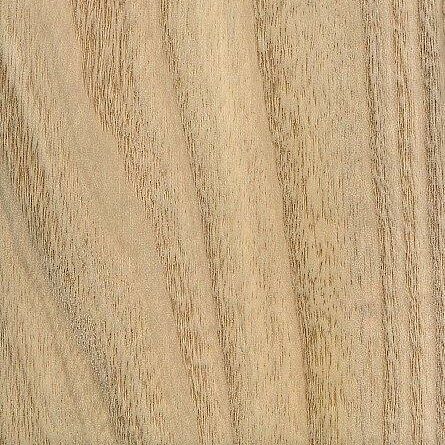 I must confess that I have a Catalpa tree in my back yard and it is one of my favourites. Catalpa is a classic shade tree, producing beautiful white flowers in the spring and a distinctive bean shaped fruit in late summer. It grows fast, branches early and is planted throughout North America as an ornamental tree.

Catalpa is really two species. Southern Catalpa (Catalpa bignonioides) is the smaller tree, native to the gulf coast of the southern United states. Northern Catalpa (Catalpa speciosa) is much larger growing to 100 feet with 2-4 foot diameters on average. It grows in eastern North America north to the Great Lakes region. Both species are extensively planted as ornamental trees especially in the American mid-west.

These trees rarely make it to the sawmill and are not cut commercially because ornamental trees are solitary and more importantly branch early and low to the ground leaving little material to be converted into lumber. Northern Catalpa, while growing in sizes large enough to harvest, rarely grow in stands large enough to economically harvest. This makes Catalpa wood relatively rare despite the large number of trees actually growing.

It’s a shame because Catalpa may the most under-rated and under-appreciated  hardwood in North America. It’s ring is porous like ash and oak producing a bold figure on flat cut boards. It’s extremely durable like cedar and cypress making it ideal for exterior projects. Catalpa is also one of the most stable hardwoods, and while the wood is soft, it is a pleasure to work by machine or hand.

This softness may limit it to projects that will not see a lot of wear and abuse, but for carving and turning and objects meant for display it excels. The carver will appreciate the way Catalpa yields to the edge while holding a high degree of  detail. The turner will enjoy the dramatic appearance its bold grain produces on large bowls. While it has limitations in case work, I suspect it will exceed expectations in showy surfaces such as raised panels.

Care must be taking when preparing Catalpa for finishing. Sanding can produce a washboard surface since the softer early wood will be removed quicker than the harder latewood. Avoid hand sanding unless you are using sanding blocks. The differences in density between the early and late wood make it prone to blotching when finishes are applied. Using a conditioner or several light coats of shellac can minimize the blotching.

When stained, Catalpa can appear muddy. Stains should be tested on scraps first before applying stains to the project. If stains don’t work, dyes can be used. Oil is perhaps the best finish for Catalpa. It highlights its beautiful grain producing a shimmering surface that is very appealing. Being ring porous, Catalpas grain will have to be filled if you want a perfectly smooth surface.

The question that remains is: where can I get some? Specialty wood dealers occasionally stock Catalpa, usually as carving / turning blanks or large planks. Local sawmills are another possible source. Finally, local arborists may cut down Catalpas that have reached their end either biologically or as part of the garden design.

Catalpa from these sources will often be purchased as green material and the resourceful woodworker will have to dry their own lumber. Catalpa is a good candidate since it is very stable even when drying. Since it is soft and less dense, drying stresses are limited, yielding wood with little tension or degrade. That said, Catalpa contains a lot of water and may take a little longer to dry to equilibrium.

If you decide to dry some Catalpa, keep the pile well stickered, neatly piled, weighed down and protected from the elements. End-grain should be coated to prevent excessive moisture loss. Once the wood has reached equilibrium when drying outside, it should be brought inside for further seasoning. Just remember to keep your stash neatly piled as described above.

Whether it’s purchased from a dealer or DIY dried, Catalpa will not disappoint.  Whether you carve or turn, work by hand or machine, the bold grain and distinctive appearance of Catalpa will draw you in with its alluring appearance  While many species we commonly use are becoming harder to find, Catalpa is patiently waiting to be discovered.