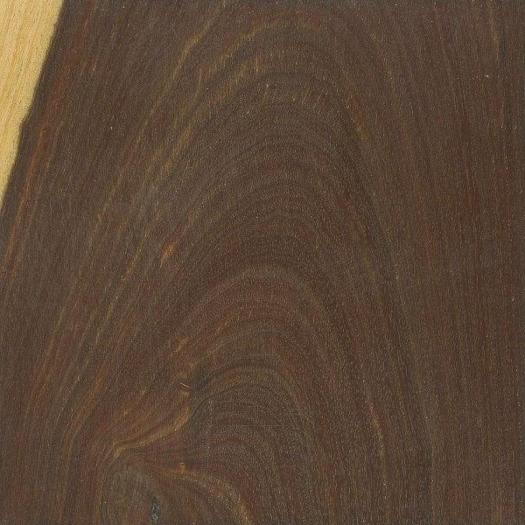 Lignum vitae is the common name for a group of six species from the genus ‘Guaiacum’, best known for their strength, density, and durability. Of the six species, only two (Guaiacum sanctum and Guaiacum officinale) are commonly used by the woodworking industry. Endemic to the Caribbean and the north coast of South America, the wood was first brought to Europe in the 16th century. Originally it was prized for its medicinal properties. The waxy resin of the tree has been used to treat all sorts of maladies including arthritis and bronchitis. The chips of the wood are also brewed to make a tea. However, the physical characteristics of the wood supplanted its medical applications, and many applications for it were found as the industrial age advanced. 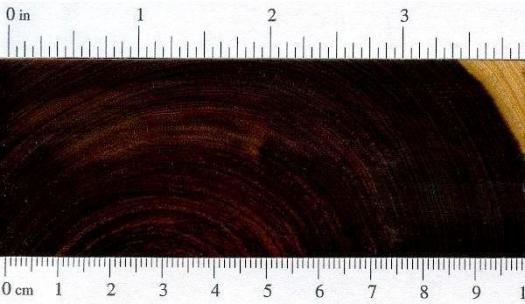 The tree itself is small, rarely exceeding thirty feet in height. Diameters of twelve inches are common, but some exceptional trees have diameters approaching thirty inches. Being the densest of the commercial timbers means it is difficult to dry. Drying may take several years; but once it is seasoned, it is extremely stable.

The heartwood ranges from a dark olive to an almost black shade of green. The colour is age dependant because the wood will darken on exposure to light and air. The sapwood is small in size when compared to the heart and is usually a creamy yellow in colour. The grain of lignum is interlocked and this is sometimes frustratingly hard to plane.  It has an extremely fine texture with a distinct waxy/oily feel to it. This waxy quality comes from the resins in the wood, which can make up to 30% of the wood’s weight. The rare combination of density, durability, and strength is unique to lignum. Since its discovery coincided with the age of sailing, it soon became a favourite wood for ship builders. Pulleys and sheaves on sailing vessels were made from it and they rarely needed to be replaced. Many of the original components are still in use today. The wood has been used as shaft bearings in hydroelectric plants due to its self-lubricating properties. It makes a superb propeller bearing in all manner of ships from nuclear submarines to tugboats. Other applications that require a hard dense wood include bowling balls, croquet mallets, and police truncheons. It is an exceptional turning wood, holding intricate detail well especially on threaded objects. If you make wooden hand planes, lignum makes a wonderful sole because it is self-lubricating and durable. Only recently has lignum seen its place in the industrial world supplanted with the development of modern alloys and composite materials.

As expected, this is a difficult wood to work. It will ride over the top of jointer heads due to its density. Success in jointing will depend on sharp cutters, proper technique, and taking light passes on the machine. It will dull cutters quickly. Pre-boring for screws and nails is essential. Due to its resin content and density, it is difficult to glue. Woodworkers should be prepared to use synthetic glues such as epoxy and watch clamp pressure to avoid starved glue joints. The resin will clog sandpaper making surface prep a tedious task  It polishes to a high degree and, in fact, this is the only finish needed. Paints and stains will not be successful with this species.

Centuries of use have left lignum as an endangered species. It is currently on level two of the CITES list which restricts its availability and consequently raises its price. Woodworkers willing to pay the price will find it as prefabricated pieces (bearings, etc.), small blocks, off cuts and occasionally small logs. It is usually sold by weight (pounds).

There is need for caution when looking for lignum. There are several species often sold as lignum. The most common is Verawood or Argentine lignum. Similar in colour and weight, it lacks the desirable working characteristics of real lignum. Reputable wood dealers should be able to provide import documents to verify the identity of the wood and that it was harvested legally. Endgrain analysis will also identify lignum. The pores of genuine lignum are distinctly solitary, while they are grouped together in Verawood. If you choose to work with lignum, you will have a chance to work a unique species with an interesting pedigree. It is best used in small turning, handles and other decorative objects. If making wooden hand planes is in your woodworking vocabulary, lignum, as mentioned previously, is a superb choice for the sole. Sometimes a little is enough and that is especially true of working with lignum.