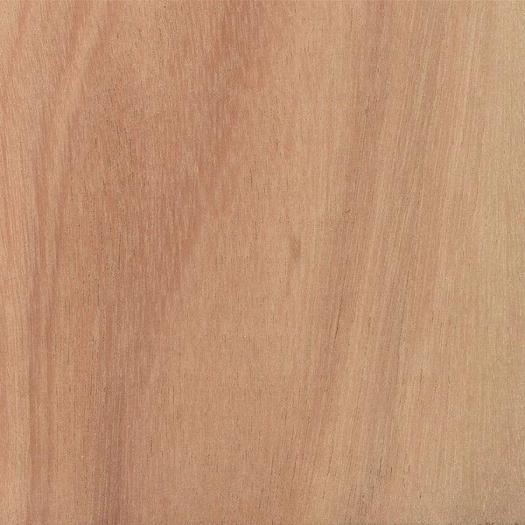 Lets face it, it has become harder to source imported species.  Some of the most desired hardwoods such as the Rosewoods and South American Mahogany are strictly controlled to prevent over-exploitation.  Lyptus, a hybrid of two Eucalyptus species, grown in Brazil and distributed by the North American forest giant Weyerhaeuser, can be a solution to this problem.

Lyptus is grown on plantations in Brazil.  Growing conditions such a tree spacing, soil conditions, etc. are tightly controlled resulting in a tree with uniform characteristics.  The trees grow fast and can be harvested in 14 -16 years.  These plantations are eleven times more productive and can produce up to thirty times the volume of lumber than a natural forest.  The fast growing nature of Lyptus guarantees a stable supply and a reasonable price for the lumber.

Lyptus can grow to heights of 100 feet with diameters of 3-4 feet.  I doubt that they typically reach those sizes before they are harvested.  The wood varies between a light salmon colour to a darker reddish brown.  The grain is straight and even and occasionally interlocked.  The texture is medium with small to medium-large pores.  Overall, the wood is hard and dense.  There is a correlation between colour and density.  The pinkish material is less dense than the brownish material.

Lyptus is available as 4/4 and 5/4 lumber with limited amounts of 6/4 and 8/4 material.  It is graded according to standard grading rules.  It is also sorted by colour.  This is of benefit to the woodworker as we can select wood for specific projects.  For example, if you prefer a Lyptus floor, the darker brown material would be the best choice given its higher density.  Lyptus is also sliced into veneer, both plain sawn and quartered as well as available as sheet goods.

Lyptus has been compared to both Black Cherry and Mahogany.  It can be used not only as a substitute for those species, but for many other common hardwoods as well.  It is best used in interior applications.  Cabinetry, millwork, trim, stairs and flooring can all be made from this product.

Working with Lyptus presents few challenges.  Given the uniformity of the grain, it machines and mills very well.  However, with its high density, it can burn when being worked.  While machining, pay attention to feed rates and keep tooling sharp.  Take light passes when sanding and change sandpaper often.  It glues well.  Nails and screws should be predrilled.  It takes both oil and water-based stains very well.  Judicious use of staining allows Lyptus to mimic most common hardwoods.  Sanding sealer is recommended before the application of the final finish.

The only concern working with Lyptus is its potential for high seasonal movement.  This may limit its use in exterior applications.  Other than that, most woodworkers should be able to accommodate this tendency very easily.  Large surfaces can be made from panels.  Solid table tops should be secured in a way that allows for movement.  If you have worked successfully with maple, you can work with Lyptus.

Lyptus should be available from most retail and wholesale lumber dealers.  It will appeal to those who want to use an imported product that does not come from cutting down rain forests.  It can also relieve the pressure on our own hardwood forests.  I expect to see even more imported species become restricted in the near future.  Lyptus is worth considering for many woodworking products as our favourites become harder to source.