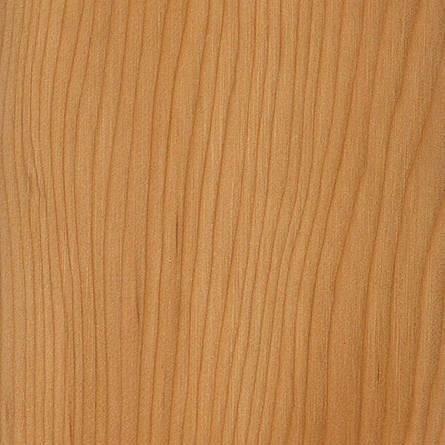 Pacific or Western yew is a small to medium sized conifer tree endemic to the Pacific Northwest of North America.  This shade tolerant tree prefers the moist habitats of the Coastal mountains from Alaska, through British Columbia and south to northern California.  There are also some small isolated populations in Idaho and the Sonoma Valley in California.

Pacific Yew trees typically grow between 15 and 45 feet in height, with diameters of 6 to 15 inches.  Larger trees may have a trunk diameter of 24 inches.  The larger trees are usually found in the moist understory environments of the conifer forests.  The tree becomes more of a shrub than a tree when it grows at higher elevations.

Pacific Yew trees are extremely slow growing and thought to be very old.  Slow growth in softwoods results in a stronger and denser wood.   This is because the growth rings are smaller and contain a higher proportion of cells with thicker and stronger cell walls.  Pacific Yew is one of the strongest softwoods and is comparable in strength and density with many hardwoods.

There is a tendency for many of the larger Pacific Yew logs to be hollow.  This is a result of heart rot where large numbers of fungi overwhelm the natural resistance of the heart to fungal attack.  These fungi will breakdown and consume the heartwood leaving the tree hollow.  Consequently, it is difficult to accurately determine the age of these trees since the growth rings of the heartwood are missing and can’t be counted

The wood of the Pacific Yew tree is very hard and dense with a fine texture.  The wood is usually straight grained, but it can be very knotty.  The grain will curve around knots creating areas that can be a challenge to work.  Despite this, Pacific Yew works well by hand and machine.  Tools must be sharp as befits this hard and dense wood.  When machining, I recommend taking small passes in small amounts to avoid chipping.  Pacific Yew will have to be predrilled for nails and screws.  Although it takes all finishes well, oil-based finishes will darken the wood substantially.  You may want to stick with clear finishes to avoid this.

Pacific Yew never achieved commercial importance.  The trees are small and the prevalence of the hollow heart along with a tendency to show knots reduces its yield of usable lumber.  Nevertheless, it has occasionally been used in furniture, small objects and turnings.  Exceptional logs will produce a very attractive veneer.  Taxol, an important chemotherapy drug was also derived from the Pacific Yew, although today the drug is produced synthetically.  Indigenous peoples have historically used Pacific Yew for paddles and bows.

Most species of yew are particularly suited for the making of archery bows and Pacific Yew is no exception.  The yews are extremely flexible and when combined with their high strength, produce bows that are supple and powerful.  The yews also have a perfect ratio of strength in tension and strength in compression.  When the bow is drawn, the back is put into tension and the belly is compressed.  Few woods can perform under these conditions without cracking or splitting and Pacific Yew is one of them.

Woodworkers should be careful when with Pacific Yew since some parts of the tree such as the leaves and seeds are poisonous.  Some people report dermatitis and breathing concerns when working with it.  Dust masks are highly recommended as well as keeping your workspace clean.  I would also limit skin contact with dust and shavings until you know your own tolerance limits.

Finally, Pacific Yew is hard to find.  I’ve only seen it as a veneer.  You may be able to obtain solid wood from specialty wood dealers, especially those located on the west coast of North America.  Supplies are limited as the tree is rare and approaching threatened status.  If you do acquire some Pacific Yew expect a high waste factor, and it’s important to know that wood dried below 12% moisture content can be very brittle.  Pacific Yew can be a rewarding wood to work with especially when selected for its traditional uses such as creating bows or paddles.