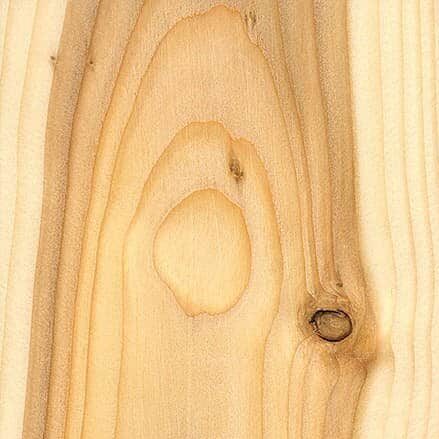 When looking for a ‘tough’ wood, woodworkers tend to favour characteristics like Janka Hardness and strength. Tamarack may be a softwood but this tree is plenty tough. It is the last tree you will see as you cross into the Arctic tundra, easily handling temperatures approaching -65 degrees Celsius.

Tamarack prefers the swamps, bogs and muskeg of Northern Canada. It grows from the Yukon and Northwest territories south to the Northeastern United States. In the Boreal Forest, it can grow in pure stands while it mixes with other species further south.

Tamarack is an important ecological species. Best known for shedding its needles in the autumn, it replaces them with new feathery needles in the spring. These delicate needles allow a lot of light to penetrate its canopy which allows a healthy undergrowth to coexist with them. They are a pioneer species, the first to grow in swamps and after fires in the Boreal Forest.

Tamarack typically grows 50 – 65 feet in height with a trunk of 1 – 3 feet in diameter. As you approach the tree line where trees stop growing and the landscape changes to Arctic tundra, the trees become smaller with heights rarely above 15 feet. It has a yellow to orange- brown heartwood with a sharply demarcated white sapwood. The wood is usually straight grained, occasionally spiral grained with a medium to fine texture. It is a member of the Pine family so resin can be present giving it an oily feel.

Indigenous people used Tamarack for snowshoes and the finer roots for lacing canoes. Being resistant to rot, it has more utilitarian uses such as train ties, fencing and hydro poles. Boat builders used the angular roots to make knee braces supporting the transom and keel. It is occasionally used for flooring and furniture, mostly in the regions where it is harvested.

Tamarack is easy to dry with little warpage and checking. Once dry, it is quite stable. It should not be dried below 10% MC as the wood becomes brittle. This will affect how the wood is machined. Tamarack can be prone to ring shake, a defect where the wood separates parallel to the grain. While often caused by bacteria and rough handling, over drying can exacerbate this problem.

Dried properly, Tamarack machines easily or it can be worked by hand if you so desire. It can contain silica which will quickly dull tools. I always recommend predrilling for screws and nails and this is essential for wood that is brittle from over drying. Resin can show up on freshly milled surfaces and this can affect gluing and finishing.

There is a difference in the density between the early and latewood within the growth ring. If you sand by hand, you can end up with an uneven or washboard surface. I would sand by machine or use hard backing on your sandpaper. This uneven density can also result in blotching when you stain. The use of a pre-stain conditioner is recommended.

Sourcing Tamarack can be difficult. It is not a popular commercial species because of the difficulty in harvesting the small size of the trees. I would look at lumber dealers in the areas where it grows because it is often cut down alongside other species.

I worked at a specialty wood dealer for a decade and never had the opportunity to take some Tamarack for a test spin. This has made Tamarack one of the species I would like to try. It’s easy to view softwoods as a construction material, but flatsawn Tamarack can be very attractive, and I can envision using it for many projects. I’ll just have to be patient until time and opportunity present themselves.