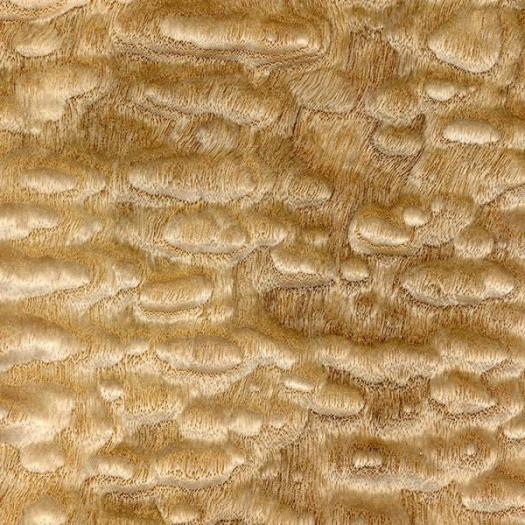 Tamo is a specific term that describes the stunning three-dimensional figure that can appear, very rarely, in some trees of Fraxinus mandshurica also called Japanese Ash. The figure is quilt like, sometimes swirling, often appearing like scattered peanuts on a lustrous brown background  It is never boring and unique in its appearance.

The tree itself is fairly nondescript  It grows throughout Northern Asia including China, Korea, Russia and Japan. Tamo Ash originated from trees growing in Japan, particularly the island of Hokkaido  It grows from 60 to 100 feet in height with diameters of 1 to 2 feet.

The wood from Tamo Ash trees is similar to North American Black Ash (Fraxinus nigra). The heartwood is a medium brown with a creamy to light brown sapwood. The sapwood can be quite large and is not sharply demarcated from the heart.  It is ring-porous, so the resulting wood has a coarse uneven texture  The grain is usually straight except for areas containing the Tamo figure. Tamo Ash figure is found only on small areas of the trunk; therefore, the rest of the trunk is plain figured and usually not harvested.

Mostly, Tamo Ash is available only as a veneer It is rotary sliced which enhances the figure and generates sequenced sheets Solid Tamo Ash is very rare and usually has minimal figure Data on solid Tamo Ash is incomplete since it is rarely used by woodworkers If you do find some solids, you will find a wood that works well by machine or hand Tools should be sharp to deal with the irregular grain It glues and finishes well. It will stain beautifully; but given the beauty of the figure, staining is frowned upon.

There are stories that the Tamo figure is the result of vines encircling the trunks of the trees and interfering with the movement of nutrients in the trunk. Apparently, this results in an altered pattern of growth which generates the Tamo figure. Historically, Japanese craftsmen reserved Tamo for royalty. Given Tamo’s rarity, they mimicked the process by tightening ropes around the ash trees to generate a more stable supply of this rare wood.

Others suggest that the Tamo Ash figure occurs only on trees that grow on steep mountain slopes and are exposed to strong winds blowing in off the oceans. I can’t confirm either theory regarding the formation of the Tamo figure, but both ideas are widespread in the literature. Either way, this wood is rare and expensive. Tamo Ash is on the CITES list, so only buy this material from reputable dealers.

Tamo Ash is used in furniture, architectural veneers, boardroom tables or any application where visual drama is desired. It has also found its place in the musical instrument world. Drum shells, electric guitar bodies and acoustic guitar back and sides have all utilised Tamo Ash. The solid wood is either turned or used in small decorative objects.

I’ve always been a supporter of the use of veneer in woodworking It is sustainable and opens up new possibilities to the craftsperson. Often the best, most attractive logs are sliced into veneer and this visual world is only available to those who are willing to work with this technique. Tamo Ash is the ideal entry species. Its figure is unique and only available as a veneer Forget all of the misconceptions surrounding the craft of veneering. This is a timeless way of executing furniture and using Tamo Ash will not disappoint.